LAVA series is primarily characterized by a low body, which is only 70mm. Luminaire introduced into production in 2011, was the first of its kind in the domestic market. Currently, these fiings are complemented by models with integrated LED source. Despite the low height, the luminaire is fully functional and allows full adjustment of the position of the light source. LAVA series has a very wide range of applications, from private suites and hotel corridors, all the way to large conference rooms. 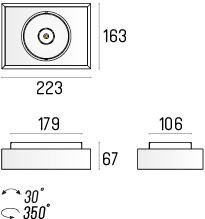